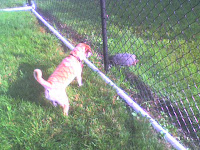 Thank goodness for our ferocious guard dog. She managed to capture a TURTLE! Outside the fence! This requires a vast amount of courage! And cunning! And most of all--a fence!
(And you can be sure that if there had been no fence, she'd have been in far greater proximity to my ankles, and not so much to the turtle.)

The writing on Crowmaker has not been zinging and inspired this week, but it has been solid and is moving along without signs of stalling out. I'll call it a good week. The Big Plan (for those who haven't heard it yet) is to write a short story each quarter and enter it in the Writers of the Future contest. I will do this until a) I win or b) I sell enough non-winning stories to pro markets and disqualify myself. This gives me a clear deadline to work toward and lots of room to win even if I don't win the contest. Crowmaker was not part of The Big Plan, but that's OK; since April 1 I've managed to finish my one short and still crank out a third of a novel. Everything seems to be working out, so I'll stick with it.

Monday is June 30, the end of Quarter 2, 2008. "Wings" has been mailed out and met that deadline. Tuesday is July 1, which heralds the beginning of Quarter 3, 2008, and the need for me to start another short story. I'll devote the next week or two to generating ideas and writing a first draft of a new story before I move back to Crowmaker and let the short stew a week or so before tackling it again. This seems to be a good working rhythm for me; cross your fingers and help me hope it stays that way.

I have no idea what I'm going to do for the Q3 story yet. I have a couple of shorts I wrote a few years ago that I could rework--they have promise but I could never quite coax out the latent magic in them. I have the bare bones of a story I started plotting before "Wings" shoved in and took over. I may use one of those, or I may just toy around with creating one from scratch. What I may also do is document the process of this story in excruciating detail here, on the theory that sometimes it's interesting to see how another writer works. Or maybe just because I am, at heart, what my buddy Jeff has called "an attention whore." (Probably the most honest reason.)
Posted by Lori Erickson at 10:51 AM

Lori Erickson
Mother, writer, and juggler of other jobs as dictated by whims of fate.

Other Links to Me